If it weren't for Becky's encouragement, I wouldn't even have a blog (let alone two of them)!

I feel so blessed. Thanks, Becky Jamison!

Honored By This Award 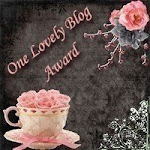 Kate Keller
Marshall, Michigan, United States
I am retired military. I am married to a very loving husband, have one son, three step-daughters, two grandchildren, 10 step-grandchildren, and seven step-great-grandchildren and two on the way. And, I am a four year cancer survivor!

So, a couple of days ago a post for an estate sale popped up on my Facebook feed. I decided to ignore it as I wasn’t sure I wanted to go to estate sales anymore. Today that post popped up in my feed again. Just for the heck of it I decided to check it out. The sale started yesterday and runs until Sunday and is in Coldwater. I scrolled through the pictures of the items for sale and was shocked at the number of old photos that were for sale as well as an old Cabinet Card album. I thought to myself, “Well, those are probably all gone now” and decided not to go.

It kept nagging at me and I finally said to myself “Just go and see if any of them are still left (including the Cabinet Card Album) and if not you’ve been wanting to go to Hog Creek Antique Mall in Allen and you’ll be right down in that area so it won’t be a wasted trip.”

So, I hopped in my car and headed down to Coldwater and to the estate sale (FYI today everything was ½ off). There were in fact still quit a few photos left including some of the old ones as well as some old documents.

But, alas the album with a red velvet cover (I found that out when I asked about it) had been sold first thing the day before. So, I bought a bunch of the old documents and photos and headed out to Hog Creek. Upon arrival I went to my favorite booth and started going through the tons of photos she had (I bought a ton as well as an old Cabinet Card album). Funny side note: as I was sorting through a big stack of photos in a bin a guy came up to me and asked if I worked there. I told him, no. I needed to use the bathroom so I took my stuff up front and a guy that works there said he’d be out of my way in a bit so I could put my stuff down. I told him I was just going to sit the items down on the floor so I could go to the bathroom. When I came out of the bathroom he asked “You’re the photo lady that comes in here once in awhile aren’t you”, to which I replied “Yes.” I gave my items to the gal at the counter so she could start ringing up my purchases while I continued to shop. The gentleman noted the Cabinet Card album I had and said “We just got another album in but she hasn’t priced it yet. I can contact her and find out how much she wants.” I walked over and there sat a Cabinet Card album with a red velvet cover on it. Surely it wasn’t the one from the estate sale…..

I proceeded to go walk around the store some more killing time for him to hear back about the price for the album. I came across a case with about 10 albums in it and told the guy that I wanted to look at them. He opened the case and I looked at each one and ended up purchasing four of them. As we walked back up to the checkout counter I asked if he ever heard back on the album. He said “No.” As we got to the counter a woman was standing at the end and he told her I was interested in the album (turns out she was the one that had brought it in) and was wondering about the price. She said she had just gotten it and paid $50 but would sell it to me for $60. She said she had not even had a chance to remove the photos from the album. I told here I wanted it and as she brought it over I asked her “Would you mind telling me where you bought that?” She said “Well, there’s an estate sale going on right now”. I didn’t even let her finish cause I knew exactly where she bought it. I told her I had been to that estate sale and had wanted to purchase that album.